Again it is summer in India, again the monsoon is late and again the country is on the brink of a humanitarian catastrophe. At the beginning of July, three quarters of India should be covered by rain clouds. But the monsoon has merely reached 20 percent of the total area. The rest of the country is experiencing a drought, preceded again by severe heatwaves. It is difficult to estimate the number of deaths, especially as an increasing number of indirect victims are expected, who commit suicide because of the expected crop failures.

The monsoon is delayed this year as much as it hasn't been for 12 years – nevertheless, it seems like India is just waiting for the rainy season, which is gradually beginning, to quickly forget the disaster. One is accustomed to droughts, which have always existed in the months before the monsoon anyway. Only a fraction of India's rivers carry water all year round and the water levels in reservoirs, water tanks and ponds decline between October and June. Now, however, water levels throughout the country have fallen to new record lows; in over 120 of 964 reservoirs, water levels are below one percent, and many wells have dried up completely this year for the first time.

Universities and restaurants have to close

In the coastal city of Chennai, the capital of the state of Tamil Nadu in the south of the country, restaurants and dormitories had to close temporarily for the first time due to the shortage of drinking water. Academic operations were also suspended at some universities. Initially, the Tamil Nadu government rejected all reports of this kind and refused aid from other states, but finally conceded and admitted bad preparations. The fact that global warming is contributing to increasingly catastrophic droughts and evermore unpredictable monsoon rains is something no one in India doubts anymore. Desperation is becoming more common.

This situation will not change in the foreseeable future, due to a number of factors. According to meteorological data, the absence of precipitation is not one of them. Despite months without rain, India has on average more precipitation per square meter per year than Europe. However, since the annual amount of rain pours over the country in a few months, a large part of it is lost. Soil sealing, deforestation and the associated erosion contribute to the fact that water does not remain in the soil but causes flooding more and more frequently. Only last year, the state of Kerala experienced a particularly severe drought and had to contend with massive flooding and hundreds of deaths in the subsequent monsoon.

According to the latest estimates, about 40 percent of the water is lost due to ailing infrastructure. Rainwater harvesting systems currently collect only 8 percent of the annual rainfall. The lack of efficiency is attributable to a combination of political restraint and a lack of awareness among users. Especially for India's farmers - the largest professional and most sought-after voter group - the political consensus is that they should receive sufficient water. With wells several hundred meters deep and free electricity, groundwater is pumped out of the ground faster than it can renew itself. This is possible because groundwater (compared to other resources) in India is a private property of the landowner. Without regulation, those who can afford deeper wells can pump water longer than their neighbours. In this way, 60 percent of India's agricultural irrigation needs and 85 percent of its household needs are covered. The amount of groundwater used in total is greater than that of the United States and China combined.

Free water also encourages many to use water-intensive cultivation methods and products. The result: millet and wheat have been replaced by rice.

A lack of regulation can also be seen in the example of the industry, which is of such importance for economic growth: limit values for pollutants in wastewater are regularly exceeded. In many cases there is no purification at all and the industrial wastewater flows unfiltered into the rivers or seas. Although this is punishable by severe penalties, most offences are not detected.

River water is the responsibility of the states. This creates the problem of sharing with neighbouring states. In times of drought, there are regular political conflicts. This even led to violent riots between Tamil Nadu and Karnataka in 2017. The conflicts usually have to be settled by courts at the federal level. 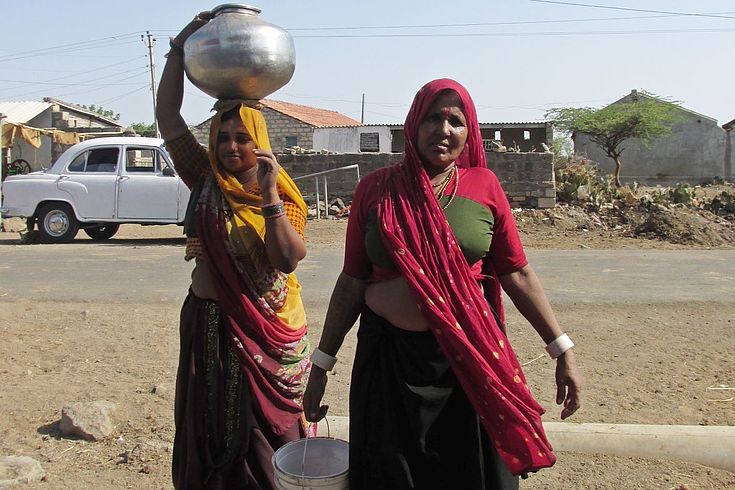 Also a form of water transport

Water as a luxury

To ensure the water supply during drought, so-called water tankers transport water to all corners of the country. Increasingly, this becomes necessary in cities – even throughout the year. According to the government think tank NITI Aayog, 21 Indian cities will have used up their water reserves next year. In the case of Bangalore, the water has to be transported from over 100 kilometres. It is no secret that wealthy neighbourhoods are preferred. An uneven treatment of water provision supports the emergence of a water mafia that illegally procures and distributes water with its own tankers. Criminal prosecution is only half-hearted, as the Mafia at least somehow maintains the water supply.

According to a Supreme Court ruling, this pricing of water contradicts the right to life. According to the verdict, water must be a good that can be obtained free of charge. For those who can no longer afford drinking water or whose wells no longer reach groundwater, existence is at stake. This year it has hit the livestock farmers in particular, who could not provide their animals with sufficient drinking water and partly lost their livelihood, especially in Rajasthan.

Due to the growing population, it is foreseeable that the situation is likely to worsen. The thirst of the Indian megacities will continue to increase and the rural areas will suffer as a result. This will increase the rural exodus and intensify the cycle.

So far, the government has tried to treat the problem primarily with financial injections. Six billion euros in loans will be granted to farmers in Rajasthan alone; the central government is currently preparing double the amount. The damage caused by drought and flooding is being countered with additional compensation. So far, all parties have refrained from drastic political reforms that could lead to less consumption and more efficient use. There is too much fear to lose the votes of the numerous farmers in the next elections. With increasingly depleted reserves and dwindling groundwater as demand increases, the question arises as to how long water shortages can be compensated for with financial relief.

The new Water Ministry even promised to connect all Indian households to the public water supply by 2024 (as of 2018: 18 percent). Experts doubt that this target, estimated at costing 1.3 billion euros, can be achieved - especially as a water connection does not guarantee that it will actually carry water on a regular basis. In addition, the high pollution of tap water is a big problem and partly responsible for the fact that diarrhoeal diseases are one of the most frequent causes of death in India.

A timid political response – and a reminder

Recurrent disasters have not yet led policymakers to take effective action. However, approaches that have already been tested in rural areas by non-governmental organisations are increasingly being discussed. The New Delhi government, for example, announced that it would make rainwater harvesting systems mandatory – albeit only for government buildings. Almost at the same time, the central government announced a similar project that would introduce or support water collection and conservation projects in 255 districts. In his monthly radio address to the people, Prime Minister Narendra Modi made water an issue for the first time and appealed to everyone to "save every drop". He also called for cooperation with non-governmental organisations and resorting to traditional water-saving methods.

Modi’s reminder underlines the seriousness of the situation. The government must follow his words with powerful measures that not only sound impressive, but are also effective. This, however, requires radical programmes and cooperation with industry and non-governmental organisations. If central and state governments do not have the courage to radically limit groundwater use and control wastewater, the extent of the next droughts will have irreversible consequences, such as permanent drought in further areas and increased migration. With the population expected to continue to rise until 2060, the country cannot afford to postpone water reforms anymore.

Hanns-Seidel-Foundation India has been supporting rural water conservation measures since 2012. Together with local partner organisations, various practices have been tested and mediated in two federal states to sustainably improve local water management and prevent rural exodus. Since 2019, the Foundation is conducting a study on integrated water management in Karnataka together with the Ashoka Trust for Research in Ecology and the Environment on Integrated Water Resource Management. With national and international conferences, the Foundation is supporting the scientific discourse on water, global warming and ensuing issues in India and the region.